By Erin2 weeks ago 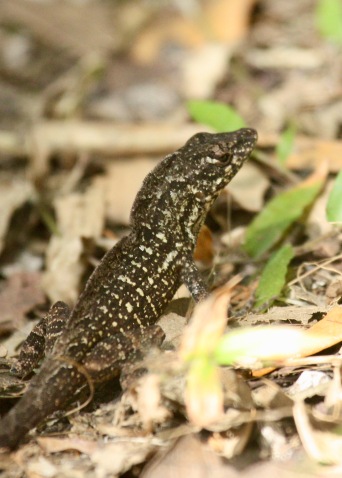 Note the Ridge Along His Back

Giving Me the Side-eye

The Cuban or Brown Anole (Anolis sagrei) is, as the name implies, native to that Caribbean island. This highly invasive lizard was first reported in the Keys in 1887. It remained largely relegated to southern Florida, until 2004 when it was documented all the way up in the Panhandle. It is now one of the most commonly seen lizards throughout the state.

The secret to their success? They reproduce rapidly and, as I read, they’ll eat “nearly anything that will fit in their mouths” (insects, fish, eggs, and even other lizards). Sadly, for the slightly smaller, native Carolina Anole (Anolis carolinensis) that means they’re on the menu, too.

The relatively recent arrival of the Cubans in central and northern Florida has forced the natives to quickly adapt. Carolina Anoles have moved further up into the canopy and in just 15 years their footpads have increased in size to help them with their new, predominately arboreal lifestyle. Hopefully, this separation of territory will lead to a détente that will allow them to coexist.

Look At That Spiral!