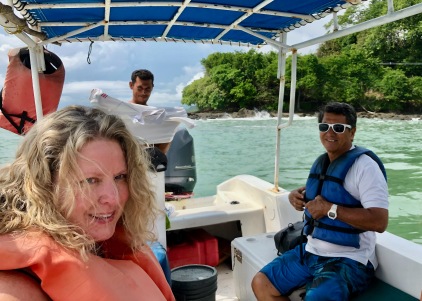 Looking Back Down the Coast 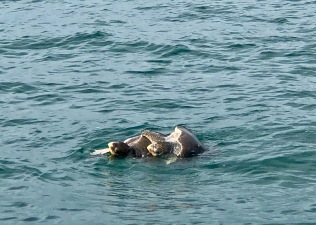 My new friend, Karen (that I met in Montezuma) convinced me to take a boat ride out to Isla Tortuga a few days ago. The eight of us were an eclectic group of travelers from all over; Switzerland, Germany, Spain, North Carolina, and another girl also from Texas (her Longhorn logo hat was a dead giveaway). I admit to having second thoughts when I saw our small boat but I’m so very glad I went ahead with it!

Our captain, Rudy, handled the boat like he was born on it. On the way out his watchful eyes found humpback whales and a pod of bottlenose dolphins for us. No photos of those, sadly. I was being ever so very cautious with my phone since last week I watched a friend drop hers in the water during our booze cruise fundraiser. As difficult as that was for her in the states, I can only imagine how lost I would be here in another country trying to manage without mine!

Roughly an hour later we reached our island destination in the Nicoya Gulfo and over the side we splashed for a bit of snorkeling. I found a small outcropping of rocks and spent my time floating with the current among a school of colorful Grunts. Below me I watched the occasional King Angelfish, and other beauties that I could not identify, flit by.

An hour later we pulled ourselves back into the boat for the quick jaunt over to Isla Tortuga where Clemente had lunch ready for us: delicious fresh fish, rice, watermelon, and pineapple all washed down with a cold Pilsen. After a stroll along the beach I found a partially shady spot to spread out my towel and promptly dozed off – it was that relaxing!

Our return trip yielded a few sea turtle sightings, including a pair of green sea turtles that were mating. It felt a bit voyeuristic to watch them yet it was also weirdly fascinating (and truthfully, they didn’t seem to mind). Overall, it was another wonderful day in paradise. Pura vida!