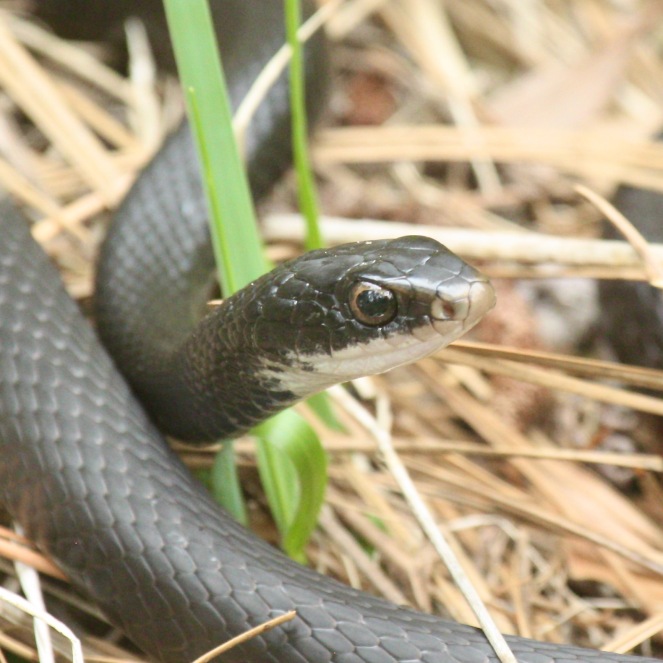 While roaming Walsingham County Park last week I saw six Southern Black Racers (Coluber constrictor priapus), though I’m sure I missed many others. Since this species is active during the day it is the most commonly seen snake in Florida. I think I saw more than usual since they are in the midst of their breeding season (March through May).

As their common name implies, their first defense is to flee and man, are they fast! It was a definite challenge to get a few good shots of these speed demons.

This jumped out at me at the park yesterday afternoon. I had been following a pair of Indigo Buntings, hoping for a decent photograph when I spotted this star. It was so eye-catching that I stopped what I was doing and switched cameras.

Ordinarily, the naturalist in me would clamor to learn the name of the plant and details of its life history. But sometimes, it is just enough to admire a thing for its beauty…

Too Much Time on My Hands

I was stuck at one of Florida’s infamous, long traffic signals on my way to volunteer at the local food bank the other day. Bored out of my mind I noticed this sticker on the car ahead of me. I love word games like Boggle so I set out to see how many words I could make out of Passholder. Humble brag, I remain – as yet – unbeaten at that game (which is why no one will play it with me anymore).

I also have a bit of a potty mouth, so the first word that jumped out at me I won’t write here (if you’re curious, just drop the P-D-R, no need to rearrange any letters). Needless to say, I continued making words for the rest of my drive.

My list is 279 words long (not including that first word). All words are three letters or longer and yes, I allowed plurals. I imagine many of you have extra time on your hands right now, so why not give this a whirl? I’m curious to see your list!

This is only the second sand dollar test that I’ve found since moving to Florida. I’m even more pleased with this discovery since it is rather small, about an inch across. I often see pieces of much larger sand dollars on my beach, perhaps someday I’ll luck into a whole one.

Regardless, I remain fond of this little one. And isn’t that perhaps one key to a happy life, to find joy in the simple things?

The camera on my phone doesn’t do today’s sunset justice but I still thought it was worth sharing.

Under My Lone Palm

Until I received clarification from the sheriff about the county-wide beach closure I avoided my beach for an entire week. Considering that the beach was the main reason I moved here and that I only live two blocks from it, it was quite a challenge.*

On the plus side, the rule forced me to explore some nearby areas that I had been ignoring. Thankfully, I discovered a sweet little spot on Boca Ciega Bay where I could hang my hammock and relax (while practicing safe social distancing). My view of the sky reminded me of a Jimmy Buffett song…

“From under my lone palm I can look out on the day,

Where no bird flies by my window,

No ship is tied to my tree…”

* Please note, I am not making light of COVID-19. And I sincerely hope that you and all your loved ones are well.

Watch What You Say to Squirrels

Since I’m avoiding humans (per social distancing guidelines) I’ve begun chatting with the local wildlife. Met a squirrel the other day, our conversation went something like this:

Me: Hey, Squirrel. What’s up with you?

Me: There’s a lot of that going around. This stay at home stuff is driving people nuts.

Me (backing away slowly): No, no. Not edible nuts, it was a figure of speech…

Lesson learned. Hey, I didn’t promise it would be scintillating.

Limpkin on the Hunt

An afternoon at Walsingham County Park in Largo provided me with an interesting view into the life of a Limpkin (Aramus guarauna). As usual, I snapped pictures of things that caught my eye as I strolled around. It wasn’t until I returned home and did a bit of research that all the pieces slotted together.

There were empty shells of the non-native Channeled Apple Snail (Pomacea canaliculata) littering the edges of the pond. Since they measure in at roughly three inches and are colorful I had to risk the muck in order to photograph them. In a rare positive twist when dealing with invasive species, the native Limpkin loves to dine upon them.

Their preferred food source, the endemic Florida Apple Snail, is a bit smaller and in decline (for a wide variety of reasons). I was pleasantly surprised to learn that I caught one of their egg masses with my camera that day. Here’s hoping they all hatch and survive!

Later I was able to watch a Limpkin up close for few minutes. I was hoping to catch the snail-eating action but instead a jogger flushed my bird. I followed at a respectful distance and was rewarded with a view of shift-change at the nest. The newcomer (not sure it is possible to identify gender, no apparent sexual dimorphism that I could discern) settled in after making a few decorative changes to the foliage.

I plan to check back soon (if quarantine restrictions allow) and see if there are any hatchlings. I just never know what show nature will have in store for me!

I don’t know about you but I’m happy to close the door on March. Here’s hoping that April is kinder to us all. Stay safe and healthy, my friends!

Note: While our beaches closed to the public ten days ago, they are allowing local residents access to the beach with one important caveat, we must stay on the wet sand. As a very nice officer explained to me, the ocean is not closed so anything that the water touches is fair game. Just as long as I observe social distancing rules.

Last week, I was so busy looking up at the trees that I almost stepped on this striking Eastern Cornsnake (Pantherophis guttatus). Before I was even consciously aware that anything was in the trail, my brain forced my body to take two giant steps backwards.

I suppose my conditioned response was the result of growing up in the Sonoran Desert where my encounters with rattlesnakes far outnumbered my meetings with non-venomous serpents. Knock on wood, but I’ve never been bitten or even struck at, though that distinctive rattling sound kicks my heart rate up every time.

Sadly, this snake is often confused with the venomous Eastern Copperhead and killed. One of the traits that differentiates the two is the eyes. If you get close enough (or, may I suggest a zoom lens) look for round pupils versus the cat-like eyes of the copperhead.

By the way, guttatus is Latin for spotted or dappled. What an attractive snake!