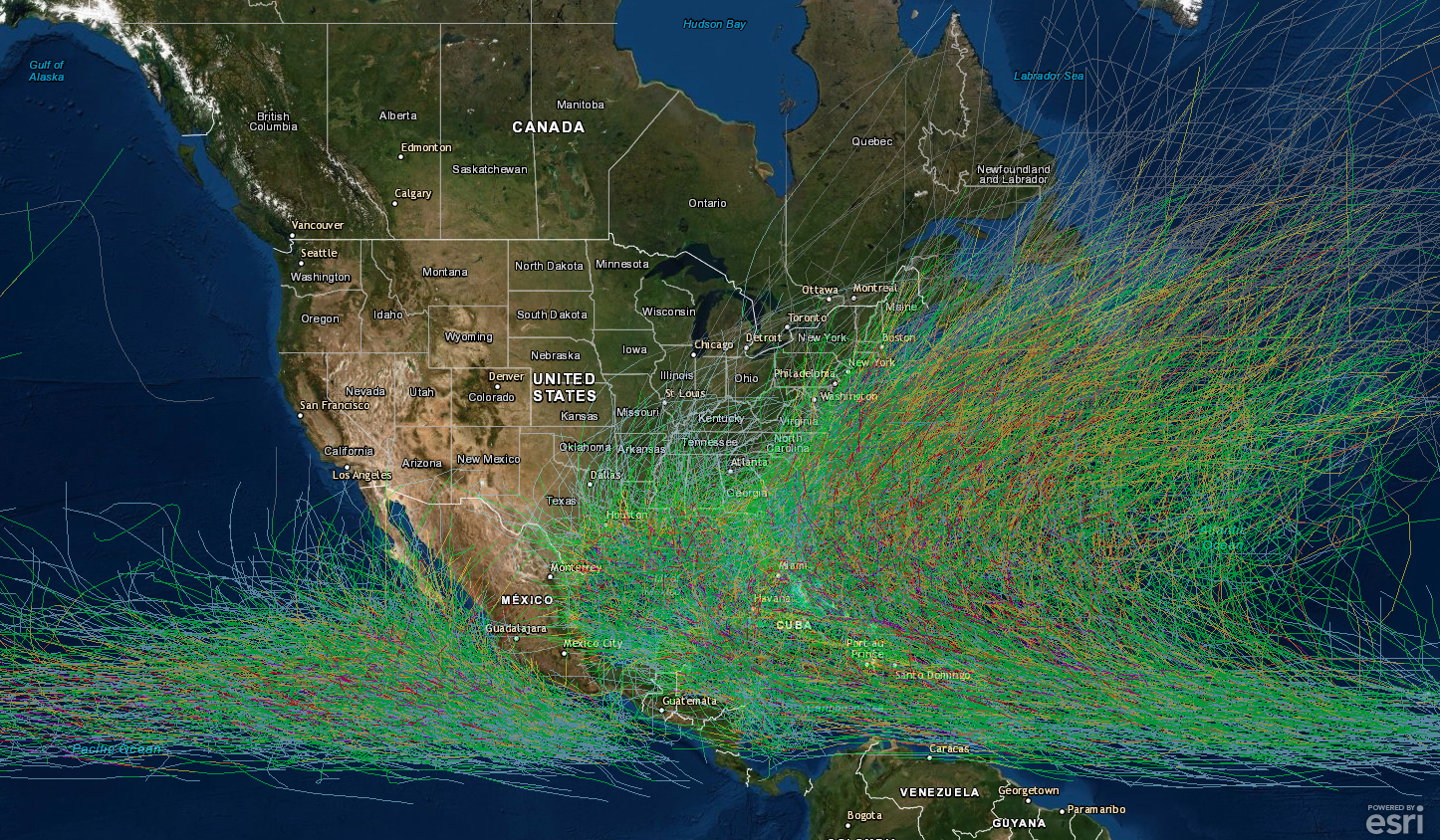 The diversity in coloration and even facial markings of Blue Jays is quite remarkable. There aren’t any plumage or size differences between the sexes, nor do they dress up for breeding season like other species. But each individual is slightly unique. I suppose as a communal bird that helps them tell each other apart?

As you may already know, their feathers are not actually blue. The blue we see is the result of light refracting through special structures on the feather barbs. The intensity of the blue is controlled by the amount of melanin, which is actually a brown pigment.

Apparently, Nature does not adhere to the What You See Is What You Get (WYSIWYG) principle.

This Eastern Gray Squirrel (Sciurus carolinensis) decided its best course of action was to pretend to be a statue, “Nothing to see here, folks, I’m just a branch!”

If you look closely you can see my silhouette in its eye. Now don’t fret, my zoom lens afforded me that opportunity while I still maintained proper social distancing. I didn’t linger long before slowly backing away and allowing the squirrel to resume its busy lifestyle. 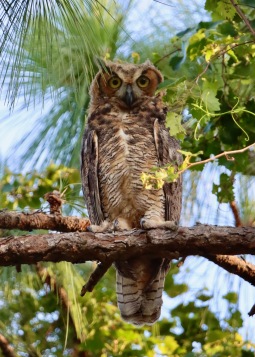 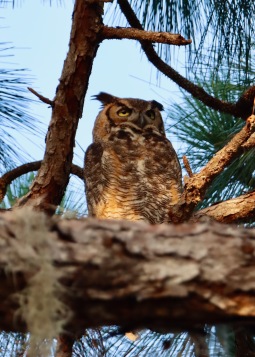 Remember the poor beleaguered owlet that was taught a very powerful lesson about the daytime pecking order? Well, I was fortunate last week to stumble across the whole family.

Since the daytime temps and the humidity have been rising I’ve adopted a more crepuscular lifestyle; on the beach before noon, back to my house for lunch, then some sort of outdoor activity in the two hours before dusk.

The benefit to a nature stroll at that time of day is that wildlife viewing opportunities double: the diurnal animals are making the best of the remaining daylight before going home to rest, while the nocturnal ones are emerging and preparing for their night.

From right to left: I first located and spent time admiring one of the parents. I can’t be 100% positive but it seemed like the smaller of the two parents, so I’m going to call him Dad. Several soft chirps let me know there were other owls nearby. Then I spotted an owlet alone on a limb in the next tree over. Dad spooked when people walked by and I followed him to the top of a nearby pine where he settled next to another owlet. As I returned to the trail, I found Mom in a tree near the first owlet. Unlike the other day, this time the parents were keeping a good eye on their babies.

All I can say is, look out mice!

It can be rather challenging to get a decent shot of a Carolina wren (Thryothorus ludovicianus) as they are rarely still. The genus certainly earned its name, Latin for reed jumper, which takes into account the species’ preference for riparian areas and incessant movement.

Found in most every woodland patch in the eastern US, this is our second largest wren (after the Cactus Wren, denizen of my old stomping grounds). Though I didn’t get a photo, there were three fledglings eagerly awaiting their parent’s return under a nearby bush.

I was fortunate to find a couple Florida Fighting Conch (Strombus alatus) shells on my beach recently. The sturdy, butterscotch-colored shells are surprisingly heavy for their size.

This is a smaller relative of the West Indian Fighting Conch (Strombus pugilis). Though both share the territorial male behavior that earned them their names.

The rest of the time, the snails live peacefully in the intertidal feeding on algae. They are edible but since these only reach about 5″ they aren’t really worth the hassle. Besides, I’d rather have them out there keeping the algae under control!

I came across this sea turtle nesting site two days ago. It was the first one I’ve seen on my stretch of beach here in Treasure Island. Pinellas County has over 20 miles of sandy beach that are monitored each dawn during season for sea turtle nests.

Of the three species known to nest here; Leatherback, Green, and Loggerhead, the latter are the most common. Their nesting season runs May through August with the first nests of 2020 spotted on May 8th.

Since these beaches are very popular, officials have asked the public for their help: report any turtles or nests, turn off or dim outdoor lights, pick up trash, and smooth the sand. Of the four items, knocking down sand castles is the most fun!

Here’s hoping the nesting season goes well and all the little hatchlings make it safely to the water! 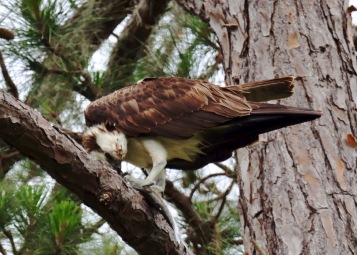 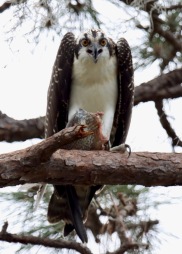 The waters at Lake Seminole Park must be chock full of fish because these two Ospreys (Pandion haliaetus) were very successful. Good thing they had something big to occupy their time since it allowed me to get a few good shots. Just look at those talons!

This handsome raccoon was so busy foraging that it didn’t even notice me (it helped that I was downwind). The word raccoon was anglicized from the Algonquin language and means “one who rubs, scrubs and scratches with its hands.” Pretty fitting description.

I felt fortunate to watch for about twenty minutes before it headed up my side of the bank and was startled by the sight of me. It beat a hasty retreat back into the creek but not before I captured a decent portrait.

I popped over to explore Lake Seminole Park this afternoon after the rain stopped. I figured it was high time to venture out beyond my favorite stomping grounds. As luck would have it, I came across this adult Little Blue Heron (Egretta caerulea).

Thanks, Nature, for providing me with such a nice contrast to the patchy-colored juvenile that I shared with you just yesterday. The base of the bill is a lovely pale blue and the body is an elegant slate gray but that deep purple neck is the showstopper here. There’s a lot to admire in this small package!