The Gaff, a fun little dive bar in Port Aransas, has several claims to infamy* but perhaps the most interesting is that belt sander races originated here. It began in 2005 after a couple guys argued over whose belt sander was faster/more powerful. What better way to decide the disagreement than to build a special racetrack and pit them against each other? Yet another great example of, “Here, hold my beer…”

I was delighted to finally catch one of the biweekly events. The competitors are fierce, the belt sanders are decorated and named, and the crowd is enthusiastic. 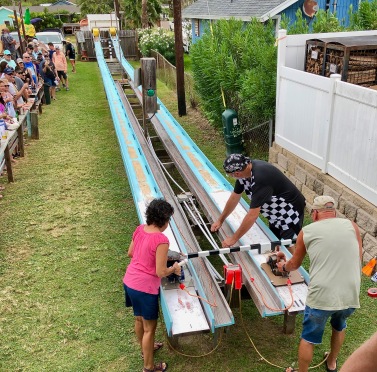 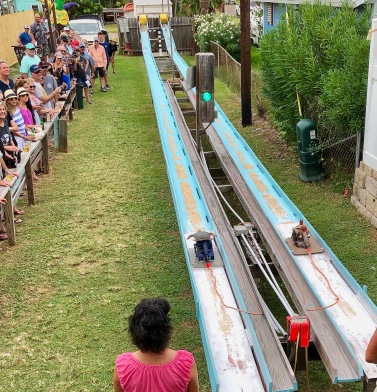 The excitement was palpable, we gripped our beers, and waited breathlessly to see who would win this heat…yeah, okay, maybe not (but we all did have a beer in our hands). Octopoke won!

*Sadly, I have not yet attended Chicken Bingo at the Gaff (picture a large Bingo card on ground, a chicken in a cage over the card, and where the sh*t falls determines the winner). Definitely something to look forward to!